The second quarter saw negative market returns accelerate downward from declines in the first quarter.  For the year, thus far, the S&P 500 has lost -20.0%, which is the largest first half loss for the large cap index since 1970.  Losses were widespread among most major asset classes.  Small cap stocks, as measured by the Russell 2000, lost –23.4% and international stocks also fell with the MSCI EAFE losing -19.6%.  Most astonishingly, the bond market has registered its worst six month performance on record, with the Bloomberg Barclay’s Aggregate Bond Index falling -10.4%. 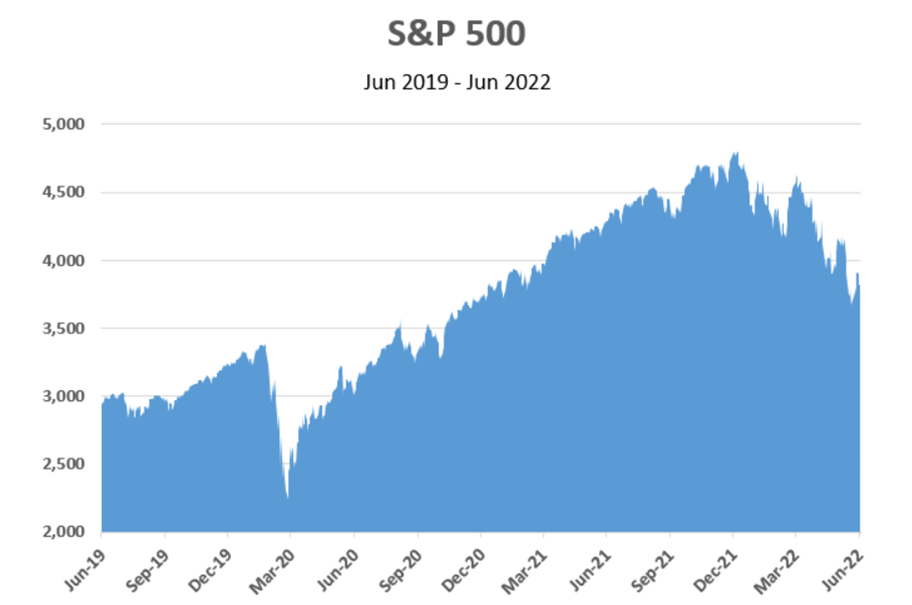 The market’s primary concern has been inflation, and perhaps more importantly, the Fed’s aggressive response to attempt to tame the sudden surge in prices. There have been several contributors to current inflationary pressures. The economy has been heating up coming out of the worst of the COVID crisis. Supply chains have been severely disrupted due to COVID and have struggled to meet increasing demand. Record amounts of government stimulus have put more cash into the economy. Finally, the ongoing conflict between Russia and Ukraine has pushed energy and grain prices higher.

To fight inflation, the Fed is making use of their primary monetary tools. They are raising interest rates and reining in their accommodative monetary policies in an attempt to reduce demand, which will hopefully cool inflationary pressures. They’ve stated that they plan to raise short-term rates to 3.5% over the coming year, from near 0% at the beginning of the year. They initiated their plan earlier this year and have increased rates 1.75% thus far. When the Fed turned from accommodative policies to more restrictive policies, the market raced to price in the coming rate hikes. This pushed bond yields higher (and bond prices lower) and has punished the stock market.

But there is only so much the Fed can actually do to impact inflation. As stated above, most of the contributing factors to inflation here in the U.S. are global in nature. In the simplest terms, a global pandemic caused global supply chain and service disruptions. Now as the world economy emerges from the worst of the pandemic, businesses and the global economy are struggling to keep up. The chart below, courtesy of JPMorgan, paints a clear picture of how widespread the global inflation problem has become. 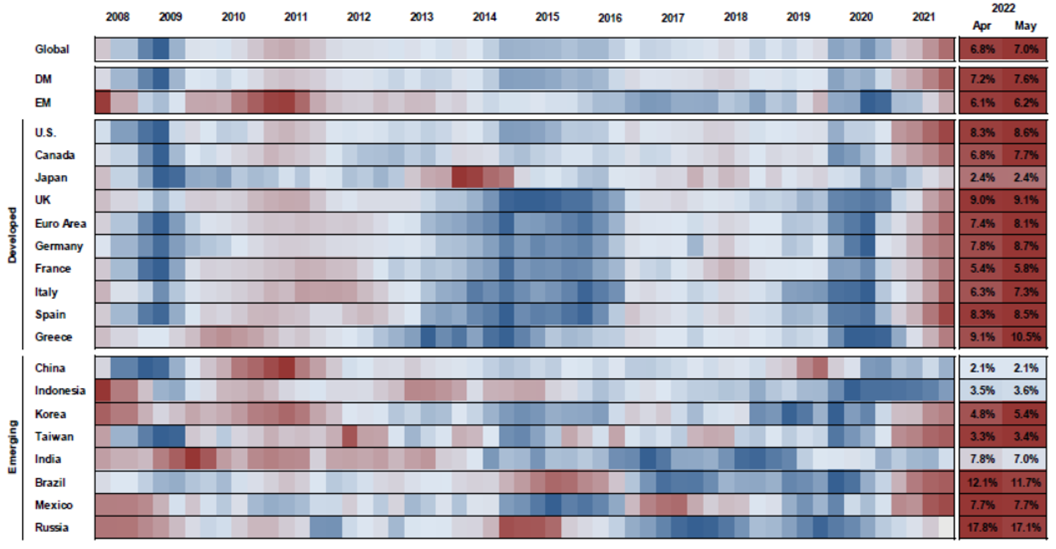 *This graph is not intended to recommend any investment or investment activity. Source: JPMorgan

It’s apparent at this point that the market is acutely focused on the direction of Fed policy, which is currently tied to inflation. We can’t be too hopeful that the market will stage a comeback until there is evidence that inflation is beginning to cool. But, we are happy to report that there is some good news in that regard. There are signs that inflation may be coming “off the boil,” so to speak. Many critical commodity prices have pulled back sharply from their recent highs (WTI Crude –12%, Copper –20%, Corn –23%, Cotton –33%, Wheat –33%, Natural Gas –38%, Lumber –55%). It also appears that the Fed’s efforts to cool the economy is having the intended effect. Housing starts, consumer confidence, and the purchasing managers index (PMI) have all turned lower.

As the economy shows evidence of strain under the Fed’s monetary tightening campaign, many have begun to wonder if a recession is coming, or perhaps has already begun. Most strategists feel that if there is a recession, it will likely be brief and mild. Further, there are multiple points of strength in the economy. Most notably, the labor market remains very strong, with the most recent employment report showing unemployment holding firm at 3.6%, with nearly two job listings for every available worker. It’s worth noting that it would be highly unusual for the economy to dip into a recession while the labor market is so robust.

Even with the rough start this year, it’s important to remember that the stock market has enjoyed an exceptionally powerful run in recent years. The past three calendar years have delivered an average annual return for the S&P 500 of 26%, which is far above the long-term average of 11.5%. Much of these gains came with remarkably low volatility as well. Given the unusually high gains and calm markets, a decline like we’ve experienced was probably overdue. It remains our opinion that it is impossible to predict when market turns will begin or end. We feel confident that this pullback will eventually end and that the market will recover and reach new highs. Whether that happens later this year or next is impossible for anyone to predict.

Looking forward, we are hopeful that we’ve seen the worst of the market pullback. Regardless, we believe that successful investing depends on maintaining a long-term perspective and remaining disciplined when faced with market uncertainty. While it’s true this was the worst first half of the year since 1970, there have been several 6-month periods more recently that have been much worse. As the chart below suggests, rough stretches like we experienced most often lead to much higher returns going forward. 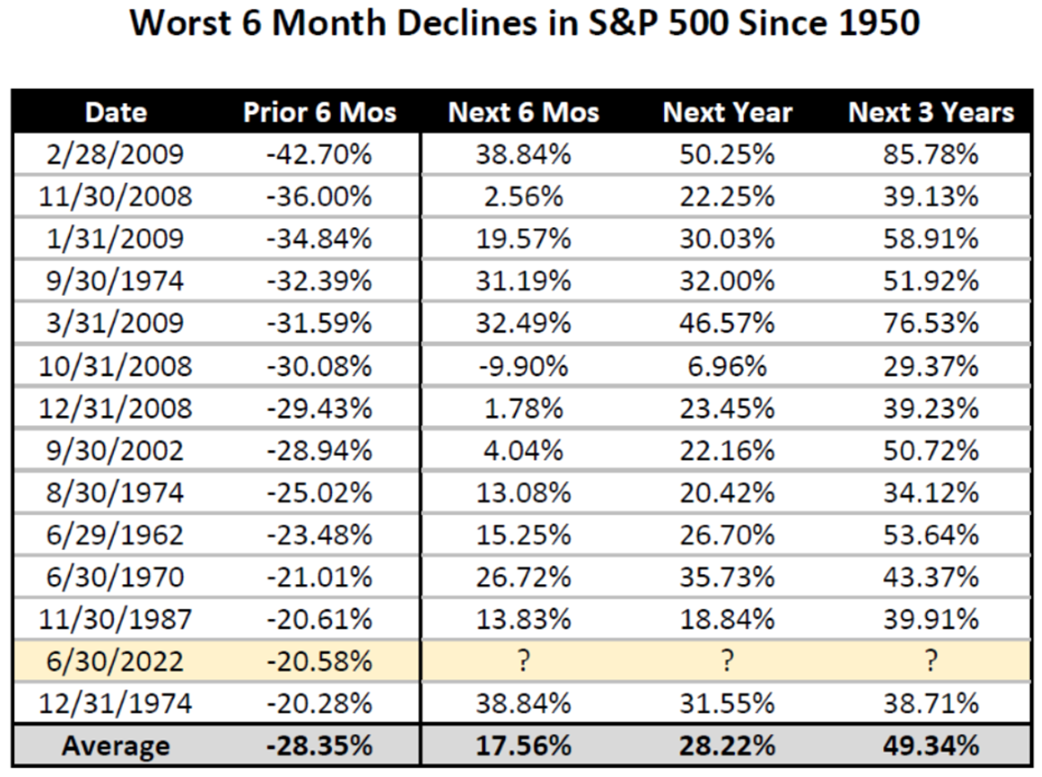 *This table is not intended to recommend any investment or investment activity.

The returns in this table do not include income from dividends.

Thank you very much for your continued confidence in our service and advice.  If you would like to discuss our opinions, outlook, or your portfolio in greater detail, we would be happy to schedule a meeting or a conference call at your convenience.  Lastly, don’t keep us a secret.  If you know someone who would like help planning for their financial future, we will be pleased to speak with them to see if we can assist.

Owen Murray joined Horizon Advisors in 2005. As a core member of the wealth management team, Owen is principally involved in investment research and portfolio construction.