The third quarter saw markets continue downward after declines in the first two quarters. For the year thus far, the S&P 500 has lost –23.9%. Losses were widespread among most major asset classes. Small cap stocks, as measured by the Russell 2000, have lost –25.1% this year and international stocks have fallen as well with the MSCI EAFE losing –27.1%. Most astonishingly, the bond market has registered one of its worst performances on record, with the Bloomberg Barclay’s Aggregate Bond Index falling –14.6% so far this year. 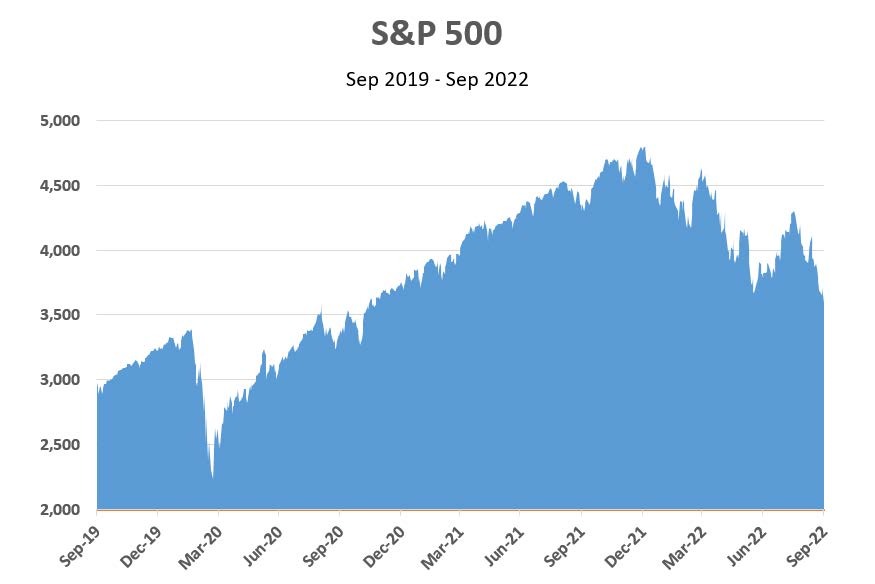 The quarter began on an optimistic note. There was evidence that inflation was beginning to peak and a growing hope that the Federal Reserve would soften its hardline approach of quickly raising interest rates to battle inflation. In July, the S&P 500 returned 9.2%, and investors began to believe that the bear market bottom might have been reached in mid-June.

After recouping more than half of the year’s losses, the summer rally began to flag in mid-August. Then, in a much anticipated speech, Fed Chairman Powell delivered an increasingly “hawkish” message that emphasized their commitment to raise rates until inflation was under control. This dispelled any hope of change in policy by Fed and began the current slide in the market. The summer rally was over and August ended down -4.1%.

In September, a slightly higher than expected inflation report, followed by a 0.75% increase in the Fed funds rate sent the stock and bond markets down sharply. September ended with the S&P 500 down -9.2% for the month, and despite the strong start the quarter ended down -4.9%. This brings the year-to-date performance of the S&P 500 firmly into bear market territory and down -23.9%, with the index registering fresh bear market lows to end the quarter.

For clients with a balanced portfolio of stocks and bonds, this has been a surprisingly difficult year. The bond market, as measured by the Bloomberg Barclay’s Aggregate Bond Index has fallen -14.6% this year, which is one of the worst performances for the bond market on record. In ordinary market conditions, bonds offer protection to market downturns. However, with interest rates rising dramatically, bonds and stocks have fallen in tandem.

The Fed has made it clear that they are committed to lowering inflation. As of the August reading, the year-over-year Consumer Price Index is up 8.3%. However, CPI has barely moved on a month-over-month basis for the past couple of months, suggesting that pricing pressures are beginning to subside. There are also several key areas where inventories are rising, and prices are softening. We are hopeful that inflation will soon decline to the point that the Fed will end their campaign of rate increases.

Before 2022, interest rates had been at or near historical lows for more than a decade. The surprise this year has been that rates have moved higher more quickly than anticipated. The upside is that bonds are now much more attractive than they’ve been in over a decade and many have expected that rates will eventually move back to a more normalized range. 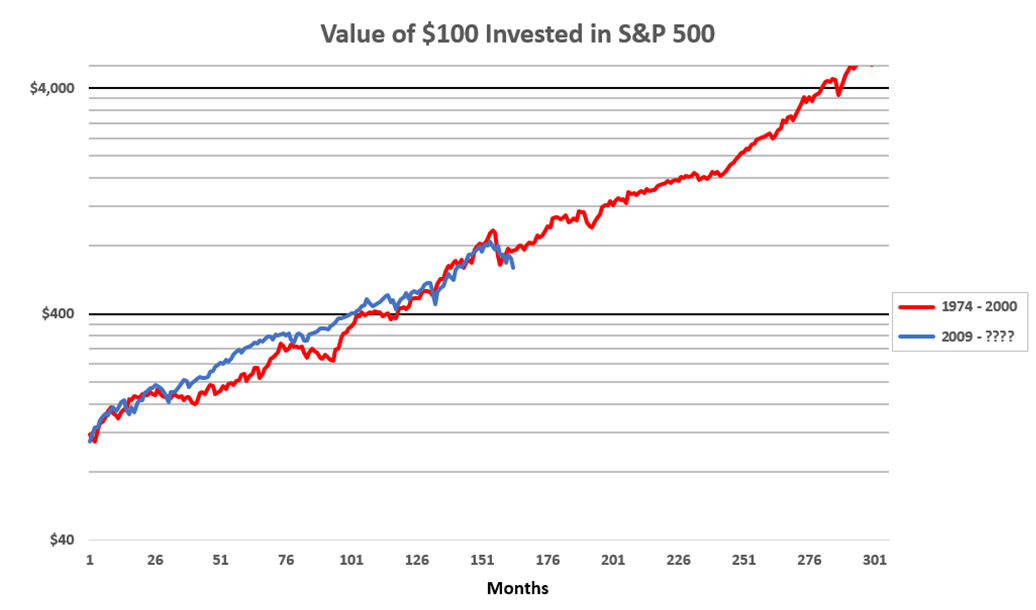 There are reasons for investors to be optimistic in the short-term. The primary reason for the bear market this year has been the Fed’s campaign of raising interest rates to fight inflation. Most of this year’s swings have been directly tied to their actions and market expectations about their next moves on rates. The Fed could change the direction of their policy at any time, which would very likely result in a swift market rise. Additionally, the result of this year’s market selloff is that stocks are a lot cheaper than they were at the beginning of the year. As the table below suggests, severe market declines are generally followed by attractive market returns in the following years. 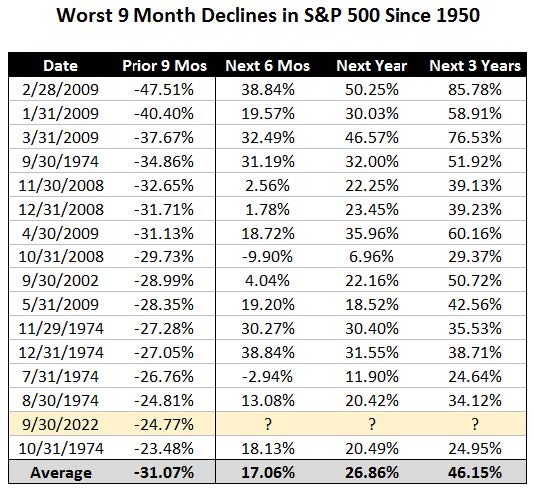 *This table is not intended to recommend any investment or investment activity.

Thus far, 2022 has proven to be a very difficult year for investors. However, we remain convinced that it is impossible to predict when market cycles will begin or end. We feel confident that the current pullback will eventually end and that the market will recover its losses and reach new highs. Whether that happens later this year or in coming years is impossible for anyone to predict. Looking forward, we are hopeful that we’ve seen the worst of the market’s decline. Regardless of what happens in the short-term, we believe that successful investing requires a long-term perspective and remaining disciplined when faced with market uncertainty. For our part, we plan to look for opportunities to rebalance and tax-loss harvest where appropriate as we close out the year.

Thank you very much for your continued confidence in our service and advice. If you would like to discuss our opinions, outlook, or your portfolio in greater detail, we would be happy to schedule a meeting or a conference call at your convenience. Lastly, don’t keep us a secret. If you know someone who would like help planning for their financial future, we will be pleased to speak with them to see if we can assist.

Owen Murray joined Horizon Advisors in 2005. As a core member of the wealth management team, Owen is principally involved in investment research and portfolio construction.